Each year the WSU Center for Real Estate and the Kansas Chapter of Certified Commercial Investment Members (CCIM) present their annual Lifetime Achievement Award. The award honors local professionals who have made outstanding contributions to the commercial real estate profession, and is a great honor and a tribute to individuals who represent the finest examples of Wichita’s rich history of entrepreneurship in the real estate industry. 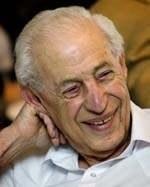 By Bill Wilson, The Wichita Eagle

Ablah, 78, was presented with artwork during the chapter’s annual December banquet at Crestview Country Club. He joins Colby Sandlian and Jack Hunt as recipients of the professional group’s highest honor.

Introduced by his brother, Don, as a man who’s “good at figuring out how the system works and then working the system,” much of Ablah’s speech centered on his business friendships with Fred Koch and his son, Charles.

He credited Fred Koch’s support for the first $2 million loan that jump-started his real estate career, and called Charles Koch “the second-best business partner I’ve ever had . . . next to the woman I married 50 years ago.”

“Most of the deals I did early in my career were outside Wichita (for that reason),” he said. “I had a different image in other cities and that’s why I did there what I couldn’t do here.”

Ablah talked about his deals with Charles Koch: The purchase of Chrysler Realty from Lee Iacocca and their northeast Wichita land deal that eventually facilitated the expansion of K-96.

In his book, “The Science of Success,” Koch – chairman and chief executive of Koch Industries – praises Ablah’s vision and their shared values.

When their company, ABKO, dissolved, Ablah took 2,000 acres in Comotara and a New York City office complex as part of the profits, he said.

The Comotara land quickly came into play when efforts to build a stretch of K-96 in east Wichita stalled. So Ablah and Koch, who controlled 2,000 acres that now includes his Koch Industries offices, donated about two-thirds of the land to the state, which otherwise couldn’t afford to start the project.

“I think that’s really made a significant change in Wichita, and I’m very pleased with that,” Ablah said.

Tony Utter, outgoing president of the CCIM chapter, credited the K-96 donation with “furthering a lot of real estate careers in Wichita.”

“In addition to fast travel across town, that really spurred a lot of economic development,” he said.

“I know I would have done a lot fewer deals without it.”

Mr. Ablah is the third recipient of this award, joining Colby Sandlian and the late Jack Hunt.