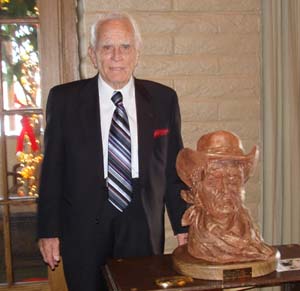 Jack Hunt’s life story reads like a fiction novel. He was raised an orphan, mauled and nearly killed by a bear as an adult, received a Purple Heart during World War II, became a private pilot and was once again nearly killed after he rolled his truck atop a mountain while hunting wild game.

But none of those things are why dozens of Wichita leaders are gathering Friday to honor Hunt.

Hunt, 85, has spent the past 59 years creating commercial and residential real estate developments in Wichita and supporting the local business community any way he can.

Hunt “has been a long-term member of the real estate community, and he’s helped shape the face of our community throughout the years,” says David Leyh, CCIM director. “We’re trying to give honor to those folks that are worthy of the award, that have impacted commercial real estate.”

Teacher and a Leader

Hunt is the second recipient of CCIM’s Lifetime Achievement Award. It was given last year to developer Colby Sandlian.

The award is a joint effort between CCIM and the Wichita State University Center for Real Estate.

Hunt was one of the original members of CCIM in Kansas and helped found the state chapter. He has worked in many areas of real estate throughout Wichita.

In recent years he has developed land surrounding Wal-Mart stores, which led to him becoming the largest outparcel purchaser from Wal-Mart in the country.

“You name it, Jack does it,” says Realtor Rod Stewart, who has known Hunt since 1969.

Stewart says Hunt has been a lifelong advocate for Wichita, contributing freely to political campaigns he think will represent business interests.

“He has always had an open checkbook,” he says.

He’s also recognized for teaching young brokers, Stewart says, and the national Society of Exchange Counselors education award is named after him.

Hunt says he’s most proud of his ability to look ahead and plan for what he thinks Wichita needs, such as more shopping centers on the south side and the retail potential on Wal-Mart property.

Although CCIM is giving him the award for his influence, Hunt says the information he learned about real estate from CCIM — along with the Society of Exchange Counselors — are what made him successful.

“The knowledge they gave me sped up what I was doing dramatically,” Hunt says. “I feel very beholden to them.”

Mr. Hunt was the second recipient of this award, joining Colby Sandlian.