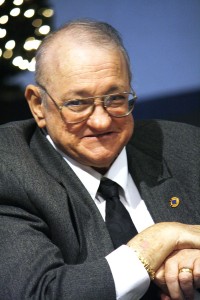 Mr. Stewart has been a licensed commercial real estate broker involved in the sale, exchange, leasing and management of commercial real estate for 43 years. Born in Newton, KS, Rod’s parents settled in Wichita in 1956 and he has lived here ever since. A graduate of Wichita East High School and Wichita State University with a degree in Political Science, Rod got his first experience in the political arena when he was elected to be a senator in the Student Government Association. This experience began a long involvement in local politics and policy-making bodies. Even though Rod never ran for elective political office after college, he participated in the campaigns of several City Commission members, state representatives and senators, as well as a Kansas Attorney General’s campaign.

Beginning his business career with the Wichita Chamber of Commerce as a membership division manager, he left the Chamber after 3 years to pursue a career in commercial real estate and joined Sandlian Realty, where he learned management, leasing and sales of commercial properties. Mr. Stewart subsequently formed Rod M. Stewart Realtor and worked as a solo practitioner for 8 years, before becoming a principal in a new brokerage firm that he and 3 other brokers established as Snyder, Sheets, Stewart and Goseland. After a successful 5 year stint with the firm, Mr. Stewart resumed his solo practice until he joined Keller Williams Signature Partners as the Managing Director of the Commercial Division, where he practices today.

Mr. Stewart has brokered the sale of many commercial properties, including several creative, complex transactions that earned him the SEC Most Creative Transaction in 1997, the Top Volume Sales Award by the Wichita Area Association of Realtors in 1990, the Walter Morris Broker of the Year Award from WAAR in 1999 and was named Rotarian of the Year by the East Wichita Rotary Club.

Mr. Stewart and his wife, Debbie, have been married for 39 years and have a son John, who is a physician specializing in internal medicine and pediatrics at the University of Kentucky Medical Center. Rod and Debbie live in Wichita, where they work together at Keller Williams Signature Partners.